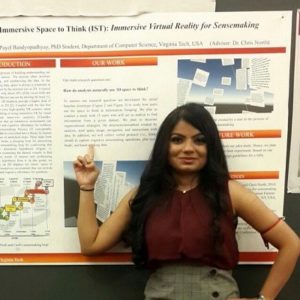 Payel Bandyopadhyay is trying to understand the role of 3D immersive environment (an artificial, interactive, computer-created scene or “world” within which a user can immerse themselves) for sensemaking in textual data.

According to Bandyopadhyay, prior work at Virginia Tech by her advisor Chris North and others has shown the part that 2D space plays in sensemaking. Her current research investigates 3D immersive environments to determine if they provide any additional benefit or not.

“When I started my Ph.D. in computer science, I was looking for a topic at the cutting edge of visualization research,” she said. “Dr. North helped me be a part of this project and I am very intrigued by it. His expertise in the information visualization field is one of the reasons I was drawn to the Discovery Analytics Center, where I can work at the intersection of human computer interaction and analytics.”

Bandyopadhyay earned a master’s degree in computer science from the University of Helsinki, Finland, specializing in networking and services. While earning her master’s degree, she worked as a full-time graduate assistant.

Springer has published two of her studies — “Navigating Complex Information Spaces: A Portfolio Theory Approach,” at the 2015 International Workshop on Symbiotic Interaction, on which Bandyopadhyay was first author, and “User Model in a Box: Cross-System User Model Transfer for Resolving Cold Start Problems,” at the 2015 User Modeling, Adaptation and Personalization (UMAP) conference, on which she was a collaborator.

In Summer 2018, she interned with the Advanced Technology Group at UPS headquarters in Atlanta, Georgia, where she worked on building several data visualization tools for UPSers, the official feed for UPS employees and fans. As of this writing, she is planning to intern at UPS again this summer.

Bandyopadhyay, who cites swimming, hiking, and dancing among her favorite spare time activities, is projected to graduate in May 2021 and hopes to continue research in academia or industry.