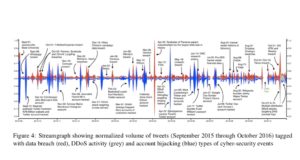 “Being a DAC student offers an eclectic array of trending areas of research ranging from data analytics to natural language processing,” said Alhamadani. “I like the combination of research areas and how everyone — my advisor Dr. Lu, other distinguished professors at the center, and fellow students — motivate me. They are always willing to share their views and offer their help.”

“Collect Ethically: Reduce Bias in Twitter Datasets,” his collaborative work with Lu and two other students, was presented at SIMBig2019 last summer. In the study, the research team addresses factors that lead to sampling bias, presents case studies it encountered, proposes an approach that will reduce sampling bias and flaws in datasets collected from Twitter, and then follows the proposed guidelines to conduct two case studies to achieve a larger dataset.

Another study, “Batman or the Joker? The Powerful Urban Computing and its Ethics Issues,” was published in December by ACM SIGSPACIAL.

Alhamadani said he is currently working to create the largest database for Arabic news articles for text summarization.

He serves as vice president of the Graduate Student Assembly in northern Virginia and has helped organize graduate student activities. In December he participated in the annual Scottish Walk Parade in Old Town Alexandria, where President Sands was Grand Marshal.

Projected to graduate in 2022, Alhamadani’s career goal is to be a professor at a Saudi Arabia university.