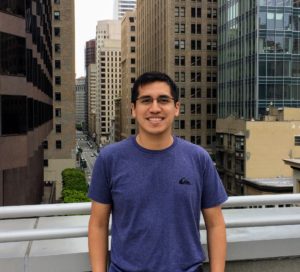 Alexander Rodriguez was a master’s degree student in data science at the University of Oklahoma when he met B. Aditya Prakash at the 2017 ACM SIGKDD Conference on Knowledge Discovery and Data Mining. That meeting sealed his decision to apply to the Ph.D. computer science program at Virginia Tech.

“I was excited about the problems he was working on and I felt he was a knowledgeable person from whom I could learn how to become a researcher,” said Rodriguez of his current advisor.

The opportunity to be part of the Discovery Analytics Center also played a part in his decision to come to Virginia Tech.

“DAC researchers are leaders in demonstrating the capabilities of data mining to drive common good,” Rodriguez said. “It is an exciting time to work on this as current sensing technologies allow us to collect large amounts of data about dynamical processes in complex systems, including opinion formation in social networks, uncertainty propagation in economic networks, and human mobility in cities. Understanding these complex phenomena embedded in big data can ultimately assist city planners, government officials, engineers, and others to make better decisions for their communities.”

With another DAC Ph.D. student, Bijaya Adhikari, Rodriguez is co-leading Virginia Tech’s team (which includes Prakash and Naren Ramakrishnan) in the FluSight challenge, an epidemic prediction initiative at the Centers for Disease Control and Prevention (CDC) where researchers from all over the United States test their best methods for forecasting seasonal influenza.

Rodriguez spent last summer as a research intern at WalmartLabs in Sunnyvale, California. Assigned to the Machine Learning Ranking team, he also collaborated with other teams to propose a representation learning approach to help understand relationships between user queries, work that is continuing and will be submitted to a future conference.

Rodriguez earned his undergraduate degree in mechatronics engineering at the National University of Engineering, Peru, where he took courses in artificial intelligence for the first time. While there, he won a scholarship that allowed him to spend a year at the University of Oklahoma as an exchange student, where he was involved in a research project in applied machine learning.

After graduation, Rodriguez would like to pursue a career as a university professor or as an industry researcher.