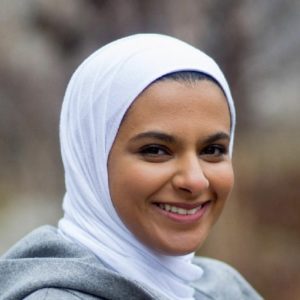 “This is where I first learned about the Discovery Analytics Center, the research being done there, and that it was located in northern Virginia as well as in Blacksburg,” she said.

While still at George Washington, AlKulaib had an internship, unrelated to machine learning, at the Advanced Research Institute, which, like DAC, is located at the Virginia Tech Research Center in Arlington.

“There I met other Ph.D. students and because of my research interests, they encouraged me to consider DAC as a Ph.D. option,” said AlKulaib.  She also found that Chang-Tien Lu, whose research interests were aligned with hers, was an associate director at DAC and now, he is her advisor.

“Dr. Lu is amazing at guiding us on how to approach problems and he creates a network of students who learn from and support each other,” she said. “And the resources available for students’ benefit and growth at DAC is beyond what I imagined.”

AlKulaib’s work focuses on social media analysis, machine learning, and Natural Language Processing (NLP). NLP centers on enabling computers to understand and process human language (natural language). Machine learning builds systems that can learn from experience (existing data), she said. By combining the two, she can start building systems that can learn how to understand languages.

Currently, she is working on news classification, enabling a machine learning model to understand a news article and then labeling the article into one of two existing classes.

“This field has lots of potential and multiple areas of research and my interest lies in Arabic,” AlKulaib said. “There are 22 Arabic speaking countries that all speak the same language — called Standard Arabic — taught in school, written in religious scriptures, and used for formal communication that includes news and work documents. But each country also has at least one informal dialect used for daily communication that is a variant of Standard Arabic named after the country or city where it is spoken. Lately, dialects have started appearing in written form on social media platforms which adds to the complexity of approaching any Arabic NLP problem, but makes it more interesting too.”

Her interest in this area stemmed from her first job after graduating with a bachelor’s degree in computer science from Gulf University for Science and Technology in Kuwait. As researcher and programmer at Kuwait Institute for Scientific Research (KISR) at the Technology Applications for Special Needs section, she provided clients with Arabic assistive technology.

“While working on a tool for speech disorders, I learned a lot about NLP and its difficulties in Arabic. That was the beginning of it all,” she said.

At the 2018 International Conference on Social Computing, Behavioral-Cultural Modeling, Prediction and Behavior Representation in Modeling and Simulation, she presented “Detecting and characterizing bot-like behavior on twitter.”

She and project partner, Abdulaziz AlHamdani, also a DAC Ph.D. student, are working on a paper about collecting datasets with minimized bias using Twitter. Basically, they are formulating a collection framework to ensure that the dataset has minimal bias, caused by using social media as a source for data collection. They will submit the paper to a conference in early June and she will present in November if accepted.

She is projected to graduate in 2021.