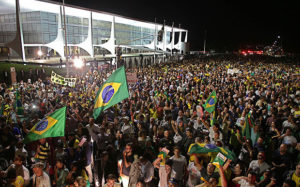 Protests are an increasingly common occurrence, but only a small percentage of them turn violent. In a collaborative study led by the Discovery Analytics Center with the University of California, San Diego, and George Mason University, a team of researchers set out to uncover triggers that foretell violence by crowds.

Gathering data from thousands of online news sources in five Latin American countries — Argentina, Brazil, Colombia, Paraguay, and Venezuela — the researchers used the characteristics of past events to develop new methods that forecast the occurrence of violent crowd behavior in advance.

“Crowd violence is not generally initiated by one factor but, often, is a culmination of outrage over a stream of preceding unresolved public issues or events,” said Yue Ning, lead author of the study, who was a Ph.D. graduate in computer science from the Discovery Analytics Center at the time of the study and now an assistant professor at Stevens Institute of Technology. “Our study showed that before a violent protest in any of these countries, other protests and strike events, even if peaceful, occurred during the prior week.”

“The fact that violent protest can be modeled before it happens is an important finding of the study,” said David Mares, Institute of the Americas Chair for Inter-American Affairs and professor of political science at the University of California, San Diego. “The link between the act of protesting and violent behavior in a protest has been difficult to understand because so many factors are operating at the same time. Our model gives us confidence that it will be possible to develop a better understanding of the factors that transform peaceful protest into violent confrontations.”

The study was designed to give governments, law enforcement, and community organizations insights that can help them support the right to peaceful gatherings, mitigate the level of frustration and anger that people who have been in many recent protests experience, and reduce the risk of violence.

“Being able to forecast violent events can help policymakers make better decisions about how to deal with protests,” said Naren Ramakrishnan, the Thomas L. Phillips Professor of Engineering in the Department of Computer Science and director of the Discovery Analytics Center. “And understanding triggers is important because any effort to decrease the probability of a violent gathering without understanding the dynamics that differentiate violent from non-violent events can lead to measures that have the opposite effect.”

For example, he said, a significant show of force with police or the military at the first sign of protest can intimidate and frustrate protesters rather than make them feel protected. If such intimidation and frustration build into anger, the likelihood of violence increases during the next such gathering.

Huzefa Rangwala, professor of computer science at George Mason University, said the study also showed that events can be influenced by what is happening in different locations. “One might have thought that people would be most affected by what happens locally, but our data suggests that those protesters prone to violence reflect upon national and not just local experiences when voicing grievances and increasing frustrations that lead to violence.”

In addition to Ning, Mares, Ramakrishnan, and Rangwala, the research team included Sathappan Muthiah, a Ph.D. student in the Discovery Analytics Center majoring in computer science.

Read the full study, “When do Crowds turn Violent? Uncovering Triggers from Media.”