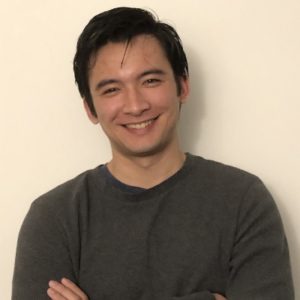 The spring semester has brought some good news for Tyler Chang, a Ph.D. student at the Discovery Analytics Center.  In June, he will begin a six-month appointment at Argonne National Lab in Washington, D.C., where he will continue to work on his dissertation while applying his work to a new set of problems relevant to the U.S. Department of Energy.

Chang, a computer science major specializing in numerical analysis, is focusing his research on interpolation and nonconvex optimization.  His advisor is Layne Watson.

“The optimization problem is to find a best configuration by choosing where to sample new data points. For example,” he said, “when designing an aircraft, each design produces some amount of lift. So, an aircraft engineer might use optimization to search for the particular design that produces the maximum lift.”

His research is partially funded by the VarSys project, an interdisciplinary effort to understand and model performance variance in computer systems. The motivation for this project is that small fluctuations in the throughput, energy consumption, etc., of large machines can have significant consequences for computer system performance, behavior, and even security.

“As a double major, I was always looking for opportunities to apply both of my skills,” said Chang. “I discovered numerical analysis while working at Old Dominion University on a NASA grant involving computational fluid dynamics, work I initially found to be extremely challenging. But it offered the perfect marriage of passion for mathematics and computer science. My current research in interpolation and optimization allows me to channel my interest in those two fields into helping to solve a wide variety of engineering design and data science problems.”

Chang is first author on three conference papers: “Computing the Umbrella Neighbourhood of a Vertex in the Delaunay Triangulation and a Single Voronoi Cell in Arbitrary Dimension,” IEEE Southeast Con 2018; “A Polynomial Time Algorithm for Multivariate Interpolation in Arbitrary Dimension via the Delaunay Triangulation,” in Proceedings of the ACMSE 2018 Conference; and “Predicting System Performance by Interpolation Using a High-dimensional Delaunay Triangulation,” in Proceedings of the High Performance Computing Symposium (HPC ’18), Society for Computer Simulation International. Chang has also co-authored four additional conference papers.

“I love the interdisciplinary aspects of my research at DAC,” said Chang. “Through collaboration, I learn about, and even contribute to, cutting-edge research in statistics, computer systems, computer security, engineering, and other fascinating fields, all while continuing to hone my skills in numerical analysis.”

When Chang has free time he enjoys weight lifting and playing 80s and 90s rock tunes on his keyboard. While he played varsity tennis as an undergraduate, his interest in tennis is now as a fan of his sister Sophie, who is currently a top 500 professional tennis player.

Projected to graduate in 2020, Chang said he would be happy with a career in either industry or academia. “But,” he said, “having great experiences working for government labs, I would consider a position with a national lab to be my top career goal.”