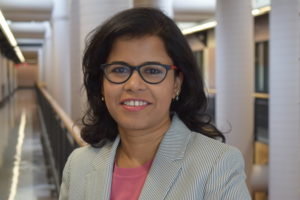 Tanushree Mitra, assistant professor of computer science and a faculty member at DAC

While online communities play a crucial role in spreading conspiracy theories after catastrophic events like mass shootings or a terrorist attack, not much is known about who participates in these event-specific conspiratorial discussions or how they evolve over time.

A new study by Tanushree Mitra, assistant professor of computer science and a faculty member at the Discovery Analytics Center, and Mattia Samory, a postdoc in the Department of Computer Science, identifies three conspiracy cohorts on the Reddit social news aggregation, web content rating, and discussion website and suggests that “joiners“ —  who join both Reddit and the conspiracy community only after an event has occurred — show the most extreme signs of distress at the time of an event and exhibit the most radical changes over time.

The other two user categories are “converts,” active Reddit users who join a conspiracy community after an event; and “veterans,” who are longstanding Reddit and conspiracy members.

“Since early press coverage typically lacks clear and definitive evidence, rumors and speculations surrounding an event increase as people attempt to rationalize the underlying complex phenomena and deal with a feeling of powerlessness,” Mitra said.

This is the first study to look at Reddit users/comments with respect to conspiracy.

“Our research found that joiners may be particularly predisposed to adopting conspiratorial attitudes. Organizations working towards dispelling conspiratorial beliefs would do best to focus their intervention efforts on joiners at the time of the event as that is when they show the most extreme signs of distress,” said Mitra.

For the study, Mitra and Samory focused on 10 years of more than six million comments in an active community of more than 200,000 users covering four tragic events — the Sandy Hook shooting, the Aurora theater shooting, the take down of Malaysia Airlines flight MH17, and the Boston Marathon bombing.

Following are other findings from their research:

Mitra and Samory will present their paper, “Conspiracies Online: User discussions in a Conspiracy Community Following Dramatic Events,” during the  12th International AAI Conference on Web and Social Media (ISWSM) in Stanford, California, June 25 to 28.