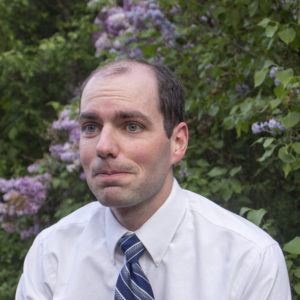 Jonathan Baker earned a master’s degree in computational and applied math at Rice University in Houston, Texas, in 2015.

When Mark Embree, one of his professors at Rice, returned to his alma mater in Blacksburg to lead the Computational Modeling and Data Analytics program in the College of Science Academy of Integrated Science, Baker did not hesitate to follow him.

“Once I decided that I wanted to pursue a Ph.D. in math,” he said. “I knew the only professor I wanted to continue down that path with was Mark Embree.”

So Baker applied to Virginia Tech as a Ph.D. student in the Department of Mathematics. Advised by Embree, a professor of mathematics and DAC faculty member, Baker is studying how best to track the changes in vibration patterns over time, an extension of his existing research on spectral theory in linear dynamics and control.

“Monitoring vibrations is important for detecting changes and damage in buildings, bridges, and other structures,” said Baker, who is also a National Science Foundation research trainee in the UrbComp program administered through DAC.

Baker’s research is taking place in the College of Engineering’s flagship Goodwin Hall. There, roughly 240 accelerometers attached to 136 sensor mounts throughout the building’s ceilings detect information on where people are within the structure, measure normal structural settling and wind loads, and track building movement resulting from earthquakes similar to the event that struck Virginia in 2011. A sensor array mounted outside the building measures external vibrations, such as wind, the bustle of traffic on nearby Prices Fork Road, the thunderous boom of tens of thousands of Hokie fans celebrating a touchdown at Lane Stadium, and possible seismic activity.

In February 2016, Baker authored Strong Convexity Does Not Imply Radial Unboundedness in The American Mathematical Monthly. He has also contributed to the American Math Society’s grad student blog.